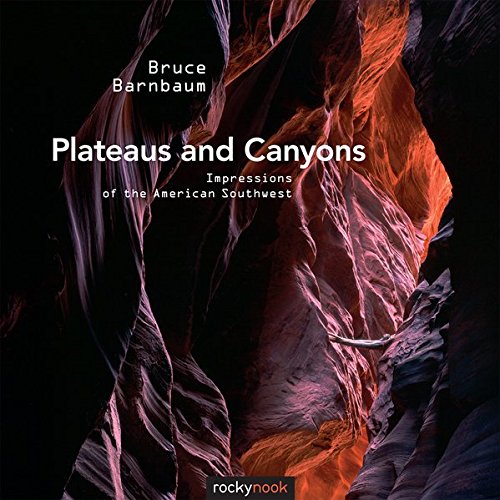 Reseña del editor Spanning across the borders of four states is the Colorado Plateau, a region that boasts an amazing diversity of landforms. Over the past forty years, master photographer Bruce Barnbaum has visited this region repeatedly—sometimes several times a year, often staying as long as a month each time. During these visits he has discovered an endless array of awe-inspiring subjects to photograph.Although widely known for his black-and-white images, Barnbaum has been quietly capturing color images all along. Finally, these stunning images have been published in his first book of color photographs. Photographed with the eye of a true artist are the remarkable colors of Antelope Canyon, Horseshoe Bend, Factory Butte, Colorado River Plateau, White Cliffs, Painted Desert, and so many other locations. Barnbaum's images reveal the hues and layers of the various minerals found throughout the region and the breathtaking landforms that were created over millions of years of faulting, folding, uplifting, and being buried under seas. In a series of short essays throughout the book, Barnbaum shares his stories, thoughts, and feelings about this majestic territory—from his first introduction to the ""Canyon Country"" in 1975, when it was little-known and rarely photographed, through the changes he witnessed over the years as more and more people visited the area, and finally to the irreversible effects the multitudes have had on it.These 95 full-page color photographs, each with an accompanying description, are certain to captivate, inspire, and above all, encourage a new appreciation of the wonder of our planet. Biografía del autor Bruce Barnbaum, of Granite Falls, WA, entered photography as a hobbyist in the 1960s, and after four decades, it is still his hobby. It has also been his life's work for the past 30 years.Bruce's educational background includes Bachelor's and Master's degrees in mathematics from UCLA. After working for several years as a mathematical analyst and computer programmer for missile guidance systems, he abruptly left the field and turned to photography.Bruce has authored several books, some of which have become classics. The Art of Photography was first published in 1994, now with a successful updated edition in 2011. Bruce is a frequent contributor to several photography magazines. His series ""The Master Printing Class"" is featured in each issue of Photo Techniques, and his articles are published regularly in LensWork. Through his workshops, articles, lectures, books, and innovative photography, Bruce has become a well-known and highly-respected photographer, educator, and pioneer.Bruce is recognized as one of the finest darkroom printers on this planet, both for his exceptional black and white work, as well as for his color imagery. He understands light to an extent rarely found, and combines this understanding with a mastery of composition, applying his knowledge to an extraordinarily wide range of subject matter. His work is represented by more than ten galleries throughout the United States and Canada, and is in the collections of museums and private collectors worldwide.Bruce has been an active environmental advocate for more than three decades, both independently and through his involvement and leadership with organizations such as the Sierra Club, the National Audubon Society, the Stillaguamish Citizens' Alliance, 1000 Friends of Washington, and the North Cascades Conservation Council.