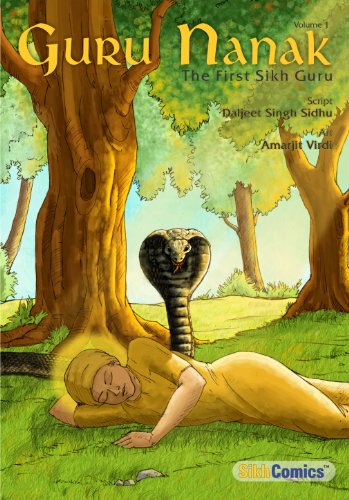 April 15, 1469, three hours before dawn, the village of Talwandi, about forty miles south-west of Lahore, witnessed the birth of one of the greatest spiritual leaders of all times. At the time of the child’s birth, a flash of light filled the home of his father Mehta Kalu Chand Bedi and his mother Tripta. When he took his first breath, the child gently laughed like a saint.

The first Sikh Guru, Nanak, was born in a society that was in the grip of religious orthodoxy and empty ritualism. Society was further crippled by female-infanticide, child marriage, subordination of women and a rigid caste system. A gifted child and deeply spiritual from an early age, Guru Nanak amazed his teachers by quickly learning the alphabet and the scriptures. He was soon composing poems in praise of God. Before he entered his teens, Guru Nanak began to question the traditional religious ceremonies and superstitions of people around him.

Believed to have attained enlightenment around the age of twenty-seven, Guru Nanak spent the next twenty-three years travelling as far as Sri Lanka, Tibet, Assam and Mecca to spread his message.

Guru Nanak and his teachings brought in a period of social change, and spiritual and religious enlightenment. His message was simple and based on ethics, social responsibility and, social justice. He asked his followers to worship one God, control worldly desires, treat everyone equally, work honestly, share with the less fortunate, and serve the community. His followers were to refrain from any outwardly display of piety and ritualism.

Guru Nanak was a divinely inspired poet. His teachings come to us in 974 hymns composed by him. This divine poetry is compiled in the Sikh holy book, the Sri Guru Granth Sahib and is considered the revealed word of God by his followers.

This is the first volume in a series of five books. It covers Guru Nanak's life from birth until his enlightenment.